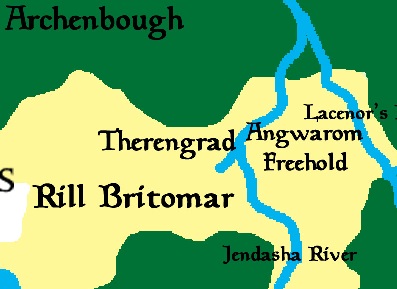 When I was designing the setting, I knew that a lot of the more civilized locations would be on the sea, benefiting from the trade from the south. But I wanted to have at least one that wasn’t, sort of landlocked and rebellious. It needed to have its own leverage, but couldn’t be military. It hit me when I was reading about Gaius Gracchus and his grain subsidies in Rome that I hadn’t entirely figured out how the region was eating. Sure, most of the towns have outlying farms, and there’s hunting and the like, but Tachros has over a quarter million people. “Some farms” are not going to feed that. So Therengrad was born, the breadbasket of Temir. Therengrad lies just east of Tachros, south of the Archenbough, and its farms feed much of the region, exporting both grains and meats all around the Lankaeran sea. It’s run by the Farmer’s League, a powerful merchant guild which virtually controls the distribution of foodstuffs in Temir. It’s also home to the Therengrad Spellbinders’ Ring, a growing guild of war wizards who have settled in Temir.

Therengrad is a sovereign city, and has a mayor who is elected by the people of the city and its outlying farms, traditionally a prominent member of the Farmer’s League, and their voice among the leaders of Temir. Lately though, there’s been a shift in the balance of power and the sorcerers of the TSR have been spending more time around the mayor’s office, with a few of them sitting on his advisory council. The mounting tension between the merchants and the mages has intensified since so many of them have returned from the war with treasures, spoils, and tales of victory. The Quartermasters, the most influential arm of the Farmer’s League, have even had a few scuffles with the mages in the streets during recent months, but the merchants are not warriors, and have been filling up the local temples.

Therengrad was once a great city in its own right, long ago before it was reclaimed by the forest. The present town began as a logging camp over a century ago, and as fields were cleared, grew into the center of commerce and trade it is today. As one of the eastern cities, it has never been besieged by the forces of Scything Crag though it’s often subject to raids during wartime. The farmer’s response to this is uniform: burn the crops. When the forces of the Angwarom Freehold to the east marched on Therengrad a generation ago, they believed that a farming community would be easily conquered, but the Farmer’s League, in particular the FLQ was resolute. Every farmer burnt their crop, throwing the region into a famine from which it took years to recover. The lesson was well learned, and Duncan Stahl, leader of the army, was sent to Therengrad as a peace offering, where he was hanged in the town square.

Some elements of the original city remain, such as the old road, a perfectly level road of a black material which leads from the heart of Tachros to the edge of Therengrad. As well, if one ventures into the Archenbough, it’s not too hard to find ruins of buildings which once stood tall. The name itself comes from a status which stands to the north of the center of town. Time has reduced the statue to just a pair of feet, and the only legible part of the inscription reads “Theren”. The town square holds some of the most intact ruins, including the fountain in the center, which only recently began working thanks to the efforts of the TSR in reclaiming the town’s aqueducts. The old magically shaped stone and wood building faces have been patched many times over the years with more traditional wattle and daub or bricks and mortar. The TSR makes its home in the town square, in a large manor house generously given to them by the FLQ.