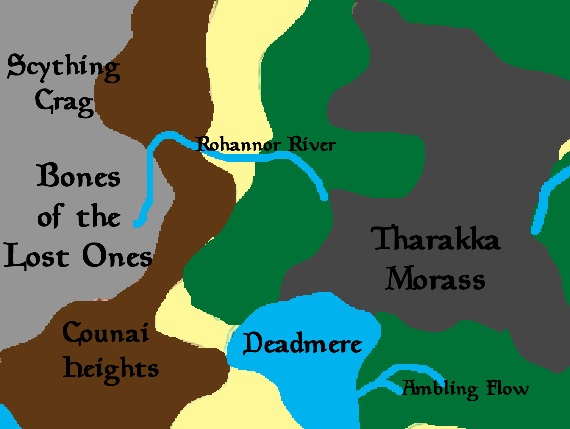 Scything Crag is an ancient fortress in the mountains of Temir, and at first glance is the home of the bad guys. Gnolls, dwarves, mind-flayers and other races struggle for dominance in its halls. But as with all things, it’s a little more complicated than it appears. I wanted the cities by the sea to have an organized enemy, but not one that was bad for the sake of being bad. There’s lots of evil to be found in the Crag, which comes in part from having to survive well outside the established frontier without the benefit of trade over the sea. 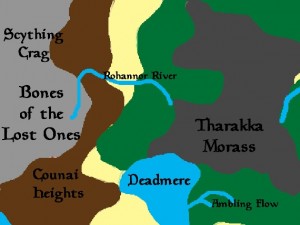 Scything Crag lies northwest of the Lankaeran Sea, deep within the Bones of the Lost Ones, a treacherous mountain rage at the edge of Temir.  It is home to many races, including dwarves, giants, ogres, gnolls, and the deep Imaskari, all of whom regard the cities by the sea with varying degrees of hostility. In recent memory, the cities have fought many skirmishes with the Crag forces as well as four major wars, the last one ending mere months ago. The cities were forced to band together against the threat, but even so several of the border forts fell. Few people venture from the cities to the Crag and survive, because of the dangerous wilds which lie in between.

Politics
Scything Crag contains a multitude of races, each of which has their own internal hierarchy.  The Crag itself is ruled by the Four Lords, leaders of the four dominant races who use their collective might and guile to bring the others into line. The races of Scything Crag include:

History
A fortress which has stood since time immemorial, Scything Crag affords its residents a unique opportunity for survival in an otherwise dangerous land. The peoples who dwell there have long sought to delve into its secrets, hoping that it might confer some advantage. Scything Crag is not the fortress’s true name, but it was christened such hundreds of years ago, when the first peoples decided to forge an alliance, rather than continue to battle for its halls. The elves, mind-flayers, gnolls, giants, and goblins formed the Five Lords, banding together against outside threats. It has made war on the cities by the sea many times since then, its peoples seeking the lush territory and seaborne trade. During the second war the Andarys, elves of the Crag, led the charge, only to have their champion defeated and be sent back in disgrace. They were cast out into the wilds to die, and though they survived as the Ashkel, many of Scything Crag still consider them enemies.

Much of the struggles of the Crag are internal, and the races out of favour are often set to guard against the beasts of the wilds, costing them resources and often lives. This has particularly taken a toll on the parliament of the goblins, who remain the Crag’s primary hunters and gatherers, having lost their place among the Lords several decades ago to the Imaskari. Some of them are not however, and the Crag, with the help of the ogres, beat back several assaults by the Neogi of the Tharakka Morass, dangerous slave-takers who make up for their lack of numbers through mind control and a lack of mercy.

Most recently of course is the war, where the forces of all of the races, either willing or conscripted, marched on the cities by the sea in an effort to seize their territory and trade routes. The march from the Crag is long and brutal, and the way is littered with Crag fortifications and bivouacs from the past. They laid siege to Isard, Malkara, and Tachros for several years, but the allies of the defenders managed to cut their supply lines and assassinate a critical number of their mages, forcing them to retreat.

Locations of Note
Scything Crag describes a large area, from the fortress proper and its four sets of walls, to the peaks above and the depths below, as well as the lands around the gates where some of the races dwell. It’s a city atop several others, as the main area of the keep has become a great market where the races come to trade, its laws administered by the Lords and their guards. Said to rival Satu Mare’s Market of Silks, anything can be bought at the Grey Market, and it stands as a symbol of the Crag’s compact of mutual survival. In the depths and among the outer walls, one can find the territories of the various races, from the halls of the dwarven kings to the silent caves of the Imaskari to the cabins and houses of the gnoll chieftains. The keep itself is massive, boasting doorways nearly fifteen feet tall, clearly designed for giants, though adapted to serve the needs of smaller races. At its heart stands the Anvil, a twelve foot tall piece of volcanic glass said to be part of the forge which made the world. After it fell deep into the mountains, the fortress was built around it. Not everyone believes the legends, but sometimes, in the quiet of the night during the new moon, people say they have heard the stone whisper to them.