Congratulations, D&D. 40 is a big number, but you made it. Despite edition wars, changes in ownership, and forums teeming with grognards, you’ve done pretty well for yourself. Your kids are all grown up and out of the house, offspring like 13th Age, Dungeon World, Savage Worlds, and a billion other spinoffs. You’ve launched some really great settings (but we won’t talk about Spelljammer). It’s time to buy that sports car and cheat on the old-fashioned d20 with some of those hot new fudge dice. They come in sets of four, you know. 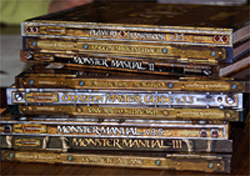 I’ve been running D&D for about 13 of those 40 years, since around the beginning of 3rd edition with a few shades of 2nd and a dash of 1st when I was in junior high. I’ve gone through all kinds of phases, from being a jerk and hating on editions I hadn’t read, to being an elitist and hating how they’re dumbing down the game (because you know what sucks? More people being able to play your game).I banned monks because they were “Too powerful,” and learned to love min/maxing from awesome people on the internet. I learned when to follow the rules, when not to, and told tons of stories.

Reflection on D&D got me more than a thesis topic, it brought my friends closer, and helped me do a thing I really love. A lot. It’s been a consistent outlet for my creativity, and lets me spend it in a way that makes people happy, sometimes makes people cry, and always makes people laugh. For me, that’s the best part of the game. There’s action, there’s tense moments, there’s even affection sometimes (more on that next week), but there’s gotta be laughter. Come for the adventure, stay for the bad jokes.

I’ve learned a lot of things through D&D, too. Colour theory for painting miniatures, game theory when designing encounters and strategies, statistics for figuring out my probability of success on my rolls, strategy, tactics, leadership, cooperation, diplomacy, and negotiation have all fallen out of that, though I don’t always apply them in real life the way I ought to. It’s still easier to face down a dragon and cut a deal than face down a boss and do the same.

There are some great communities and great resources out there, and I still delight in introducing new people to the game. The smile they get when they complete their first adventure, execute a badass move, or start to see the bigger picture of the setting is just priceless. That tension when their

character isn’t who they wanted them to be, or better yet when they want something and their character wants something else is so much fun. It’s like pushups for your imagination. I’m not always as diligent as I’d like to be, and I’ve got more commitments now so corners are cut, but I do my best to make everything as exciting, ominous, interesting, and lively as it can be.

I don’t know that I’ll be running D&D 40 years hence, I’m already flirting with other systems, but D&D will remain one of my formative games, and I think t will for a lot of people. There are a number of incredible rpg’s out there now, but there’s only one D&D. I’d say never change, but that’s the wrong thing to want. keep changing for the better.