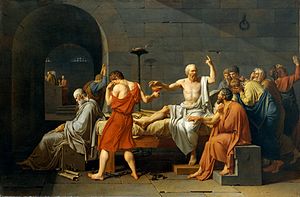 Socrates is credited with saying “The unexamined life is not worth living,” and it’s something I’ve rather taken to heart, especially with regard to gaming. The unexamined setting sin’t worth playing in, the unexamined character isn’t worth playing, and the unexamined villain isn’t worth fighting. I know. Some people just want to beat up monsters and take their pants. Sometimes I like doing that too, and Ryan and I have a Dragon Age video where we talk about exactly that. He’s the one who taught me I don’t play videogames for the story anymore. But in an rpg, I want more than confrontation, I want emotion. I want humour. I want insight and inspiration and terror and tears.

When talking about the unexamined life, there’s a temptation to wax lofty and philosophical. Socrates wanted to examine big questions, like the definition of justice, piety, and friendship, but he typically went about it by asking very small questions one at a time. It’s the small questions that add up that really matter. What’s more important to a character, their comrades or their family? Who do they turn to when they have a secret to share? How do they cope with fear? These are tiny questions that invite further questions. Why do those things and not others?

I’d complain about my players slipping on this, but I have been too. I commented to one of my players recently that some of my villains are too villainous. The Wolf, a vampire general her party recently tangled with, is elementally diabolical, a grim warrior who lives to kill and torment the living. Which is cool and terrifying in one respect, but in another, it’s utterly boring. There isn’t anything to get to know about him beyond the fact that he’s a centuries old killer recently let out of his cage. The only humour he can muster is designed to further terrorize people. I love him as an antagonist, but there’s not much there. He’s doesn’t have a favourite teddy, or a bit of sentiment in him, or despair about the fact that he can never use a water slide again. This is a fizable thing.

Because those are the things I love, especially in a game like D&D where things can get so samey so quickly, those moments when you leave the camera on a scene for a second too long and catch someone doing something they otherwise wouldn’t. Whether it’s the high priestess sneaking a cigarette or a pair of trolls inventing a secret handshake, those little moments are the ones that matter most to me, and they tend to be the ones people remember, right behind the ones where one PC shot another one in the face. Those ones tend to stick.

It’s not just humour, but I find the two easiest feelings to design scenes around are humour and fear, because in a way they’re the most intelligible and have the lowest stakes for players and PCs. I want to have moments of warmth, or relaxation, or serenity, of determination, and of depression. One of the things on my rpg bucket list is to have a PC fall in love. It’s just never quite happened. One day.

But that’s what this is really about. All of this. The unexamined life of GMs, of players, of practices, of tables, of rules, settings, characters, and rpgs. It’s not worth living.

Here’s to another year.