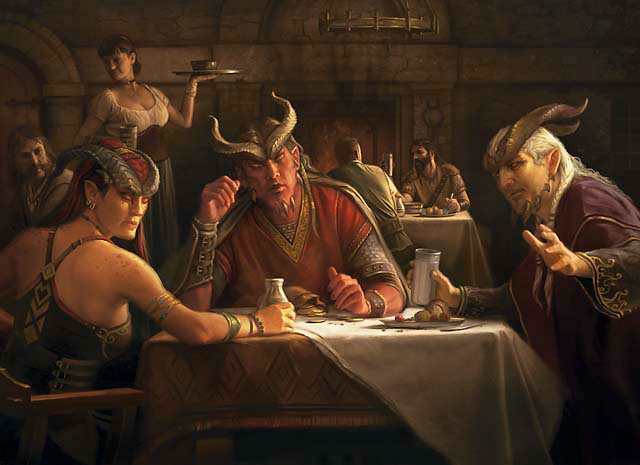 Writing this late at night while I’m editing videos and escaping my Feed the Beast addiction. There’s a post coming about that at some point, I’m sure. Just got back from Ryan’s D&D game where we saved a city from a conspiracy of devil-worshippers. I need to write a character reflection, and I need a wiki update for today, because I was without internet all weekend. Exciting pieces of life. So two birds, one stone, and my first character reflection. I’m going to update HIS wiki. Here we go.

This morning everything seemed simpler. Take a few days off, pick up a job, and try and reign in this merry band of psychopaths. Sometimes I really worry about them. The day started to change when we met with Nori, a friend of our ranger, Lee. He was investigating a counterfeiting ring in Fallcrest, run by what he called “Tiefling supremacists.” Drale, our resident thief and Black Guild member, has been reporting that the local thieves were almost annihilated in drake attacks, and he’d been investigating a massive theft at Teldorthan’s Armory. Twenty-five suits of plate armor, and they didn’t touch the cashbox. It was all a little much to be coincidence. I could smell something brewing. 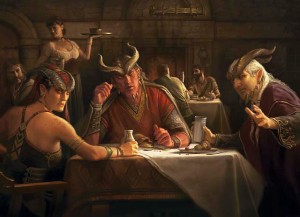 The Fell Court, by Howard Lyon

We worked with Nori, and ambushed the counterfeiters (though they did ambush our ambush). I turned their leader and made him talk. The problem with working for scary people is that you’re inevitably more afraid of them than anything else. It’s not loyalty, it’s just obedience. That was when it all spilled out. A conspiracy. A coup to seize control of the city. A name: Melech Ambrose. They’d killed the thieves to get a stranglehold on the night, and the armor was for their soldiers, who would form the core of their forces along with devils. The counterfeiting ring were also provocateurs, set on stirring the city up against the lord warden.

That was as far as we got before I killed him. I wasn’t just mad, I was afraid. This wasn’t some ruin out in the wilderness, some tribe of goblins or lost city. This was my home. Where I live. Where I sleep. Where I’m going to raise a family. I felt the energies bubbling up in me before I knew what was happening, and the magic missile burst from my fingers. “Give Asmodeus a message when you see him,” I said. “Fallcrest is off limits.” It was bravado, but I knew it had to end tonight.

The rest of the night is a whirlwind of warfare. Dragging an unconscious Nori from a warehouse while being chased by drakes. Gathering our allies at the Lucky Gnome, everyone from the tieflings of House Azir to my wife and her bridge club. The lord warden’s forces would meet us there. And I had a plan. Keep Ambrose’s name out of it, offer him an out. He lost no matter what now, it was just a question of what that loss would cost us. He could sacrifice much of his treasury, let go some of his henchmen, and we’d win a strong, honest supporter for at least a generation. If he were anything less the evidence would ruin him. But I was too tired. By the time we got there I’d been up for almost a day and a half, been in two fights, nearly died, and wasn’t in the mood for it. I was blunt. Told him to call it off. Offered him a deal.

They never take the deal.

We won, of course. We’re heroes. Carved our way through drakes and Ambrose’s personal guard, a group of Iron Circle warrior, and finally a pack of tar devils and Ambrose himself. Yesesril, the black ranger, took him through the heart with an arrow. I can’t help thinking that they didn’t have to die. I’ve got no illusions  about the nature of life in the Vale. Some people live, some people die. But he could have walked away. He could have done the smart thing. I should have convinced him. Regrets winners can afford to have, I suppose.

We won. We’re the heroes of Fallcrest, the city is safe, and I get to go home with my wife. Tomorrow’s a new day, and I am going to skip most of it by sleeping in.