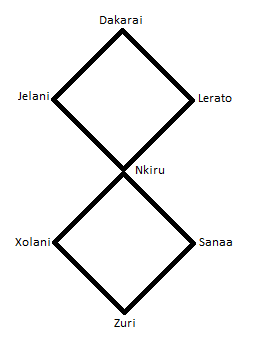 I wanted to have two competing religions in Temir, but only two, so I split up my divinity archetypes into two groups, and made one the Church of the Ivory Throne, and the other the old gods of the Kalasthari, the original inhabitants of the region. the old gods are dream gods, formless and shapeless, rather than being anthropomorphic deities.

The old gods are silent on the gods of the Three Thrones, but stand in relation to each other in a shape which is common to all of their shrines. Wisdom stands across from madness, death from the liberation of life, and the purity of dreams from the threshold of the waking world, while all of nature hangs in the balance between these powers. The Kalashtari believe that all people share these dreams except the Kalashtari, for they themselves cannot dream, because long ago their dreams left them and became gods. The gods have no formal church, though there are a few practices and symbols which have become general. They have many shrines and places of power though, quiet spots where one may sit, and rest, and dream.

Xolani, the Dream of Madness

Alignment: Chaotic Evil
Domains: Chaos, Evil, Air, Water, Madness, Dream, Shadow
Favoured Weapon: Punch Dagger
Xolani is mercurial but always destructive, its followers falling to its will as it tears at their resolve. For a people who value the powers of the mind like the Kalashtari, madness is a far greater fear than death, the loss of self and the corruption of vision which comes with it. Many centuries ago, the Kalashtari were nearly wiped out by a plague which spread from mind to mind. It is rarely spoken of, but is looked upon as some kind of outbreak of Xolani as it touched the world ever so briefly. Followers of Xolani tend to be cruel and capricious, venerating it my spreading discord and madness through magic and murder.

Dakarai, the Dream of Doors

Alignment: Lawful Neutral
Domains: Law, Earth, Travel, Force, Time, Protection, Endurance
Favoured Weapon: Spear
Dreams may come through the gate of ivory, and be false dreams, or the gate of horn, and be true, but whenever dreams come, they must pass by Dakarai, the Guardian at the Gates. It also guards those who would venture through the dream realm or cross any other threshold. Followers of the god of planes and doors often seek to serve as guardians themselves, whether as innkeepers providing safe haven for wayward travellers, or rangers on the frontier, the door to civilization. Its sign is the standing stones, and many of the residents of Temir keep a small relief of it near their bedside, to ward off nightmares.

Jelani, the Dream of Wisdom

Alignment: Lawful Good
Domains: Law, Good, Water, Air, Oracle, Spell, Fate
Favoured Weapon: Heavy Mace
The dream of silence, Jelani of the Seven Eyes sees all, but says little. Many of the followers of Jelani are philosophers and scholars, seeking to gain and preserve knowledge while following the wisdom of the seven eyes. Each eye is shown somewhat differently. Two eyes look at the world, the great and the small. One eye watches the spirit, preserving the health of the mind. One ensures that justice is observed, and one appreciates art. One looks at the past, learning from days on by, and the final eye looks ahead to the future, ever watchful for things to come. There are eight high priests of Jelani, each a learned scholar who has taken a vow of silence. It is said that each one sees what the others see, and that one of them is inhabited by the voice of Jelani itself.

Lerato, the Dream of the Dead

Alignment: Lawful Evil
Domains: Law, Evil, Water, Fire, Undeath, Magic, Decay
Favoured Weapon: Quarterstaff
The dead dream of only one thing, living again. Lerato is a god of necromancers, and the stories say that its will provides the power to return old bones to life, putting fire and hunger in the eyes of corpses. When lerato last touched the world, stretching itself into the realm of the physical, it was the Rise of Nightmares, when the dead walked, and the great city of Ezurum was laid low. The fear of Lerato and the Rise is an essential part of the taboo on animating the dead in Temir, a principle so ingrained in the region that trafficking in onyx, a key spell component for such things, is a capital crime in every city.

Nkiru, the Dream of the World

Alignment: True Neutral
Domains: Earth, Fire, Water, Air, Death, Balance, Plant
Favoured Weapon: Javelin
The world itself may be said to be a dream in the mind of a god, and that god is Nkiru of the Four Winds. Nkiru’s slumber is occasionally disturbed, and when it is, the fabric of the dream is rent asunder, the origin of tornadoes, tidal waves, earthquakes, and other natural disasters. Many of the followers of Nkiru are Shapers, mystics who sculpt the creations of their own minds, and are true neutral as well. When all of the world is the stuff of dreams, concepts like good or evil mean little, so they seek other principles to guide their lives.

Sanaa, the Dream of Freedom

Alignment: Chaotic Good
Domains: Chaos, Good, Fire, Water, Liberation, Courage, Luck
Favoured Weapon: Warhammer
Also referred to as the dream of slaves, Sanaa is the god of all people who struggle under a yoke.  Because of this, its followers have found themselves unwelcome in more than one city, and it’s even said that there have been inquisitions in Scything Crag to root out its adherents, because of their tendency to incite revolutions and even rioting in order to bring about change. The legend goes that when the Kalashtari ruled all of Temir, Sanaa was a tiny god, barely worth mentioning, but when they fell and the Church of the Ivory throne came to power and began its pogroms, Sanaa grew as well. The kobolds of Tachros have a different story. The golden age was no golden age, and Tachros was sundered because of their need, the city bursting free of its chains and exposing the underside for what it was.

Zuri, the Dream of Beginning

Alignment: Chaotic Neutral
Domains: Chaos, Fire, Dream, Creation, Destruction
Favoured Weapon: Longbow
Zuri is the god of artists and bards, the spark of creation and the end of everything. Its followers sing the songs of creation, short hymns every day which are devoted to the objects and energies in the world. It is said that were they all to stop singing, the world would cease. They also seek to dream strange dreams, gathering stories and experiences and spreading them as best they can. Kalashtari, who do not dream, have a special place for Zuri, for when they sleep, all that waits is emptiness.