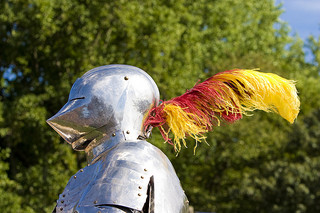 It’s almost a dirty word, isn’t it? It brings to mind memories of self-righteous douchery and stupidity in shining armor. The lawful good hero who insists that everyone abide by his code of honour, and comes with a standard issue stick up his butt. Almost everyone I’ve ever spoken to about it has a story like this. But let me tell you a secret.

Playing the hero is one thing, but paladins have to. If they don’t, they’re punished. All their cool powers go bye-bye. This creates a really interesting kind of tension, but the code of honor can also put pressure  on players. There’s a tendency to overcompensate, which is where the self-righteousness and even fanaticism can come from. As a way of talking about heroism, today I’m going to teach you how to play a paladin without being a jerk. Feel free to share with your local paladins. 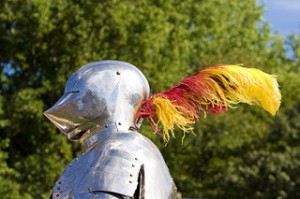 There are a lot of common themes for paladins. Some of them are essential, and some of them aren’t. Ideals like justice and compassion are essential to being a paladin, because they’re necessary for being a good person. The trappings of full plate, horses, and religion, while interesting historical artifacts, aren’t essential to the idea. You can just as easily imagine a modern paladin who wears a leather jacket, rides a motorcycle, and cares about helping people more than any particular faith. When you really get down to it, paladins are just adventurers with heroic values.

There are lots of things that a person can value. You can find lists of them online that leadership groups use for value exercises. But not all of these things are heroic values. Financial success, power, respect, and meaningful work are all things that you could value, and valuing them isn’t untoward. But there isn’t anything necessarily heroic about them. Heroic values are ones that necessarily motivate people to choose to do the right thing over the practical one. Money  can do that, but it doesn’t have to. It can just as easily motivate people to do the wrong thing. Compassion on the other hand, motivates you to go out of your way to do the right thing, even when it isn’t practical. It’s hard to justify hurting somebody out of compassion. 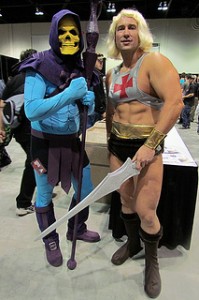 With that said, it’s important not to confuse values with virtues. Things like courage and wisdom are things that we value in heroes, but they’re not heroic values, they’re just virtues. Think about He-Man. He-Man wants courageous allies, but so does Skeletor. They both value courage in a meaningful way, so it can’t be distinct to heroes. On the other hand, He-Man values compassion, while Skeletor doesn’t. Skeletor considers a henchman who’s compassionate to be a liability, rather than an asset. This thinking carries over directly into rpgs. Most adventurers are courageous. They crawl down deep dark holes looking for money. But that doesn’t make them heroes, it just makes them brave. On the other hand, a top-flight adventurer who faces down a group of low-level thugs threatening a village isn’t courageous, because she’s not at any risk. She might be compassionate though, or acting on another heroic value.

What does this have to do with paladins? A lot. Paladins have to stick to their heroic values, or pay the consequences. This will undoubtedly bring them into tension with the party, because let’s face it, sometimes it’s really inconvenient to have a goody-two shoes. What this shouldn’t do is bring them into conflict with the party all the time, because that makes the game less fun. It doesn’t just create tension, it creates strife. What I’m proposing is a different way of looking at paladins and heroes in general that makes them work better with the group, and at the same time still gives them the tension that comes from being a hero.

When creating a hero, pick three heroic values that really matter to them. A paladin who focuses on the needs of a few people, or wants to be a healer, might really value mercy, loyalty, and compassion. A knight errant who protects the weak might value justice, compassion, and humility. A merchant who supports his community might value honesty, charity, and loyalty. This doesn’t mean that they don’t hold the other heroic values as well, but these are the three values that really motivate their actions. Now, make sure one of these values will conflict with the party’s goals. This isn’t that hard, but does depend on knowing the party a bit. Find one that’s a sticking point. If the party has trust issues, then make sure you’re loyal. If they’re killers, be merciful. If they’re mercenaries, be compassionate, etc.

This method serves two purposes. First, it creates an avenue for your hero to stand out as a hero. They act against the practical interests of the party sometimes because of their heroic values. More importantly, it creates an easy way for the party and the players to understand what you’re doing and why without having to cite something vague like “It’s the right thing to do” or mentioning your code of honour. When you introduce values to the conversation, things get more clear cut. You’re sparing that goblin’s life because mercy is something that’s really important to you. He’s beaten, and he’s no threat, so there’s no need to kill him. This also makes it easier for others to understand where your character draws the line, rather than throwing around words like good and evil.

This doesn’t just work for heroes, either. Any character that can articulate what their three core values are is going to have an easier time explaining their behaviour. But an important thing to remember is that nobody’s perfect. These values are rock solid, but people aren’t. If your character is a hero, you want there to be times when they really wrestle with their values, and consider going the other way, especially if they’re a paladin. That’s what being a paladin is all about. It’s being tempted constantly to do the easy thing, and trying your hardest to take the high road.

Does this keep your paladin from overcompensating and being self-righteous? Not necessarily. But it does mean that you can bend a little more, and that you don’t have to worry as much about conforming of an abstract idea of good. You have your values, and can stick to those, which gives you room to relax. Over the next few weeks I’ll go over some examples of heroic values, and how they fit in with various heroic ideas. In the meantime, leave those precious paladins alone. They’re doing the best they can in a cold, hard world.