Making a Character Part of the Setting

Last week I laid out the most important elements of a good character, and now I want to move forward with a bit of a how-to. One of those elements is how the character fits into the setting. Their relation to its characters, places, and organizations situates them in the game world and give them a context for interacting in it. Being a part of the setting also means having a stake in what goes on there, which gives the character their own motivations for acting, rather than having them serve as a sort of car the player drives around in the game. Having a character with genuine ties to the setting improves the amount of fun the player has by increasing their investment in the game, and today I’m going to look at a couple of ways to do that. 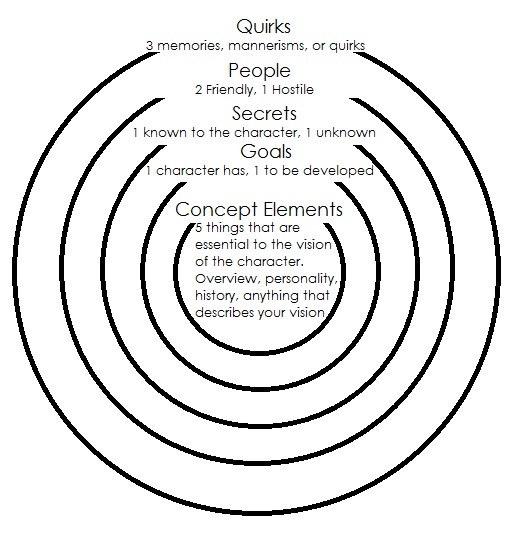 The one I’ve used the most is the ten minute background, which I first encountered in this thread on the WotC forums. It outlines five separate elements of a character: concept, goals, secrets, people, and quirks. I’ve condensed it into a diagram (which I drew in paint). Starting with the core elements which contribute to the vision of the character, you work from the inside out. The goals should be character goals which follow from that vision, one that your character has and one you’d like them to develop. The secrets follow from the vision as well, and will often relate to the character’s pursuit of those goals. Of the people they know, at least one of them should be hostile, if not an outright enemy. Finish up with three memories or quirks that make your character stand out. Were they mentored by an ancient druid, or were they raised by wheat wholesalers? Ideally the process should take ten minutes, so just fill in point form notes, and come back to flesh out the details later.

Another method, which I’m thinking about adopting because it can include the relevant parts of the ten minute background, is the 20 Questions method. If you can answer 20 good questions about a character, they’re going to be settled in the setting. Good questions are typically leading, but not loaded. That is to say that they don’t permit yes or no answers, like “What did your character do during the most recent war?”, but they also don’t assume anything about the character, as “When did your character start beating their wife?” does. If the answers are one word, modify the next question to flesh it out a bit more. The best thing about this method is that the questions are dynamic and context sensitive. If there are events particular to your setting (in Temir for example, there was a large war which ended eight months before the beginning of the newest games), the questions can take those into account.

The ultimate goal is to give the character ties to the people, places, and events of the setting. There are a lot of other ways of doing this, but these are the ones I’ve found the most useful. How do you connect characters in your games to the setting? What questions would you ask in the 20 questions?