I’ve described GMing as equal parts urban planning, storytelling and psychological warfare,  and an essential component of all of those is improvisation. It’s probably one of my favourite things about GMing, despite the amount I rant about the need to have a plan. I love creating characters and their expressions on the fly, adding little bits of flavour to my setting, and it’s saved me more than once in a pinch. Remember, if anyone asks, you planned it that way the whole time. I want to spend some time talking about improvisation and worldbuilding, character portrayal, and adventure design, but today I want to start with some fundamentals.

Improvisation is one of the best skills a GM can have, and not just because the principles are useful in play. It can ease your preparation time by helping you think on your feet, and I’ve found it helps me keep more balls in the air, whether that’s adventure hooks, characters, treasure or whatever. Note, I should really do a post on how juggling can make you a better GM. A lot of this has to do with characters and character portrayal, but there’s just as much to be done with spaces and adventures, and I look forward to discussing that in time.

Okay, so THIS rogue has superpowers…

Improv isn’t about creating things from whole cloth. It’s not “And then there’s a dragon. Because dragons.” Instead of creating something totally weird, you want it to be believable,. You want it to be consistent with your setting, and with basic human psychology, so that people are acting on needs and desires that make sense. So set some boundaries. If it’s a character, bound them in the rules a bit. Know whether or not they can fly, and stick to it. If it’s a space, create a general idea of the scope. Ask yourself what its story is, something that you can sum up in once sentence, and whatever you decide, do your best to stick with it. These boundaries will set how your players understand the element. For example, the flashy rogue that tried to entice them into buying a treasure map probably can’t fly and toss lightning around like a Greek God reject. Being consistent will help your players understand the character or space, and make your surprises more surprising.

Politicians do this all the time, and it’s as useful for you as it is for them. Set your goals for the itneraction, and try to stick with them. If it’s to get the players to observe the spooky gargoyles atop the church, make sure that’s the part you emphasize. If it’s to relay a certain piece of information or exposition through a character, make sure you actually get to it. Keeping your goals for an interaction in mind is always important, but when you’re improvising, it’s essential. Sometimes you get so caught up in thinking of what’s next you lose track of what the point is, and going back will start to trip you up. If said flashy rogue (who we’ll call Enrique) is trying to sell a treasure map, you need to know why. What does it do for you? Is it an adventure hook, a trap from their enemies? A legitimate offer? How does what it is affect how he’d sell it? If it’s a trap, he might be willing to take a lower price if it means getting them there, but if he’s legit, he might insist on full partnership. In addition to a goal I usually pick one or two things about the character or space that I want to convey. Maybe Enrique is down on his luck because his party died in a fireball trap, so he’s a little burnt around the edges and they catch  sight of him picking a pocket to pay for his drinks. If it’s his last shot, then he’d have a hint of desperation, but also probably fear if he has to go with them. Don’t be afraid to give the group an edge on understanding a character or space, as long as it’s meaningful.

3. When in Doubt, Exaggerate 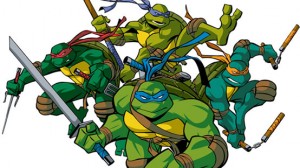 There are ninjas in New York.

Characters in rpgs are already larger than life, so don’t be afraid to go larger to make an impression. use big movements and large voices to get things across, and describe people in extremes, whether they’re grimy, huge, small, suave, or whatever. Make them into a caricature of reality. It’ll help their traits stand out to the players, and also to you, so the character will be easier to slip into if you’re called on to do it again. Develop a gimmick, whether it’s a signature tone, prop, saying, or motion, something that identifies them. Stereotypes can be really good for this, and can create an interesting story. Maybe the Iron Mandarin hires ninjas from a temp agency in Brooklyn, or the owner of the fried chicken joint your party visits is a huge Elvis fan, so there’s pictures of the King everywhere.

These three ideas basically boil down to keeping things simple, directed, and interesting. If you keep your parameters and goals in mind, it can keep you from getting flustered or too off-track. Above all else, relax. Go with the flow. If you say it with confidence, your players will believe it, and you’ll start to too. The more you improvise, the easier it gets, trust me. Share your improv story in the comments!